To protect the safety and health of all involved during the Coronavirus National Emergency, our Office is now offering virtual appointments to all new and existing clients. Learn more. 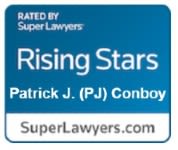 Patrick J. (P J.) Conboy II was born in Sumter, South Carolina and raised in Syracuse, New York. Mr. Conboy is a graduate of Cicero-North Syracuse High School where he lettered in numerous sports and was a member of the school's State Champion, nationally ranked cross country team. After graduating from high school, Mr. Conboy attended Onondaga Community College, where he was on the Dean's list all four semesters and earned an Associates Degree in Criminal Justice.

Thereafter, Mr. Conboy attended the State University of New York at Buffalo and earned a Bachelor's Degree in Political Science. Mr. Conboy enrolled at the University of Dayton School of Law where he completed classes in various legal fields. During Law School, Mr. Conboy clerked for a Common Pleas Judge and also worked as a legal assistant.

After graduating from Law School in 1998, Mr. Conboy took and passed both the Ohio and Federal Bar exam, and started his own practice. Mr. Conboy's practice focused on all types of cases in various Courts throughout the State of Ohio. In 2004, Mr. Conboy joined a firm with Mark Fisher and James Staton and their current partnership was formed.

"Put your faith in my hands and I'll take it from there. My persistence and passion show in the results of my cases."

Mr. Conboy was a football agent licensed by the NFL and CFL as well as the State of Ohio and Kentucky for three years.

Outside of work, P.J. is married with a child on the way. PJ. is also a foster parent in Greene County and is in the process of adopting two foster children. P.J. enjoys playing softball and basketball and is a diehard New York sports fan and also plays for the firm's softball team, "The Sharks" who have won Softball Championships in Men's and Co-ed Leagues.